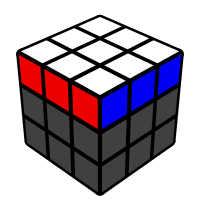 Before you can start to solve the Rubik's Cube you have to decide what layer you're going to solve first. The diagrams in this tutorial will show steps solving the white face first. It doesn’t make a difference what color is solved first, but to make following along easier, I suggest starting with the white face. 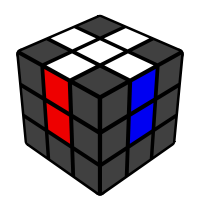 The cross is the set of four edge pieces in the top layer. Most of the cross is solved with practice and experimentation, but this tutorial has some simple advice that can help. 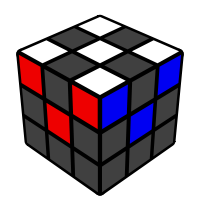 Figure E shows an edge on the top layer but in the wrong spot.

If the edge is in the middle layer hold the cube with the edge you want to move in the front on the right side. (The FR position) Remember to keep the white center on top. Do R’ D’ R This needs to be done to prevent messing up cross pieces that are already solved on the top layer.

Figure F shows the white and green edge in the middle layer that needs to be moved down.

Do this for all of the white edge pieces and the cross will be solved. Double check that you have all of the cross pieces in the right spot by making sure each cross piece matches with both center pieces.

The next step is to solve all of the corners on the top layer. Remember that the center pieces never move so you need to get the corner in the spot in-between all three colors on the corner piece. As before, hold the cube so white is on top.

Repeat these steps with all of the white corner pieces.

After solving the corners the first layer should be solved. Double check that each piece is solved. The top face should be solid white and the sides of the top layer should all match. Compare your cube to Figure I.